Difference between revisions of "N.T Survey"


Integration of skip-logic in the forms 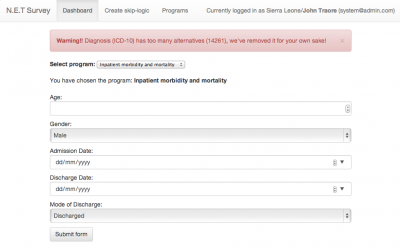 1.1: Upload a test-zip with a working manifest file to test out how the web-app works. [DONE] Uploaded a dummy app: http://apps.dhis2.org/apps/test//index.html [REMOVED FROM DHIS]

2.2: Creating a skip logic function that works with the program-forms