From mn/safe/nukwik
Revision as of 10:38, 3 July 2012 by Hansvl@uio.no (talk | contribs) (Created page with "when ionising radiation penetrates matter, the matter will be ionised. The degree of ionising is dependent on both the matter and what kind of radiation and the energy it has. Al...")
(diff) ← Older revision | Latest revision (diff) | Newer revision → (diff)
Jump to: navigation, search

when ionising radiation penetrates matter, the matter will be ionised. The degree of ionising is dependent on both the matter and what kind of radiation and the energy it has. All detectors uses the ionising capacity of the radiation. 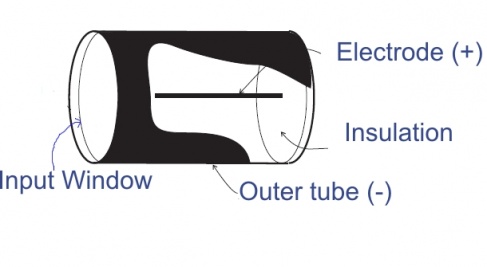 A schematic drawing of a geiger-müller tube
a Geiger-müller (GM) tube is made of a metal tube with a conducting thread inside. The conducting thread is isolated from the tube. The tube is filled with a gas, usually neon with a halogenated organic substance. It is closed in one end by a thin window (often mica, 1.4-3mg/cm2). To be able to detect radiation there must be voltage between the electrode (conducting thread, positive) and the walls of the tube (negative). When the gas in the tube is ionised the charges will separate in the electrical field, this will register as a pulse in the electronics. A counting-system register the number of pulses and shows how many times the detector has been exposed to ionising radiation. Number of counts per unit time is proportional with the sources decay constant. The proportion constant is a measure of how good the detector is to register radiation and it is called counting-efficiency

The counting-efficiency / e'p's'i'l'o'n is normally given in %. When we count on a sample the detector will also measure the background. Such as natural-radioactivety in the detector or in the screening around it. It will also have a lot of counts that come from cosmic-radiation. Therefore the counting number of the detector will be higher than what can be attributed to the sample. We can get the real number by correcting for background radiation. We can determine the background by doing the same measurement but not having the sample in the vicinity.