Setting up a HPGe gamma-spectroscopy system

The detector we use is a semiconducter, germanium based, detector. This type of detectors use a semiconducter layer of materials which generates an electric pulse when it interacts with ionizing radiation.

The detector is constructed by layers of a Ge-semiconducter which is put under a high voltage electric field. This electric field increases the number of freed electrons which cross the band gap and thus creat a larger pulse and a better resolution.


The Ge-semiconducter is temperature sensitive and must be cooled down. In room temperature the electrons can cross the gap. Therefore the detector is connected to liquid nitrogen container with a convection rod.

The detector uses a 9-pin connection to acquire needed current for the components of the detector.

In addition there are 4 other connections made coaxial cables. These include two output signal connections, one input connection for test of the pre-amplifier and a "Bias Shutdown" cable which shuts down the (High Voltage) HV-supplier if the internal temperature becomes too high.

The output signal from the preamplifier can be seen by the use of a spectroscope. We connect one of the output cables to the spectroscope.

The electric signal created in the preamplifier is a pulse tail signal. The signal has two attributes that are important: the "Rise time" and the "Fall time".

We chose a Cs-137 source to measure the Rise and Fall time. Cs-137 is chosen becouse it has one gamma-maxima around 605 keV. The source is put 15 cm away from the detector for all the measurments. Since the the "Fall time" is on the tal part of the signal, it does not vary alot. Therefore the "fall time is measured a few times with the same result, 125 µs.

Front side of the Amplifier
The purposes of an amplifier is, as the name implies, to amplify the signal from the preamplifier. But for spectroscopy amplifiers, the most important part is the signal processing. The pulse information from the preamp is converted to a form that can easily be analysed by an ADC.

The problem with the signal from the preamp is that there is no common baseline reference for the pulses. The amplifiers therefore uses a differentiator to clip the signal to a faster fall time and block the low frequency or dc components. The result is pulse shortening and a baseline. There are different methods for doing this pulse shortening.

The next step in the signal processing involves an integrator, which is used to recover the energy information from the signal and shaping the signal to a semi-Gaussian form, reducing the signal to noise ratio. The amplitude of this Gaussian pulse is directly proportional to the energy content of the preamp tail pulse. The disadvantage of Gaussian pulses is that they are wider and thus run into overlap problem at high counting rates.

The Shaping Time Constant (TC) can be adjusted on the amplifier and is usually set to so that the rise time for the Gaussian shaped output equals 2.4 * TC and the width equals 7.3 * TC. Following this rule might give you a fairly good output, but depending on what you are looking at and what you will use your data for, the TC can we tweaked to improve your output. Now giving a shorter TC will increase your output count rate, but unfortunately, shorter TC also mean that more high frequency noise will pass and thus decrease the resolution. On the other hand, higher TC gives better resolution at the cost of lower throughput. A to high TC can also lead to the effect called "pile up". This means that a new pulse arrives before the amplifier is finished processing the previous pulse and thus a summing will take place.

A side effect of pulse shaping is the presence of an under- or overshoot in the shaped pulse. This can be corrected by the so called Pole-Zero cancellation circuit. It involves adding a simple variable resistor in parallel with the capacitor in the CR stage. We adjusted the circuit by observing the signal on the oscilloscope and varying the resistant. This is done on the front side of the amplifier, using a screwdriver. 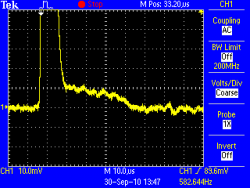 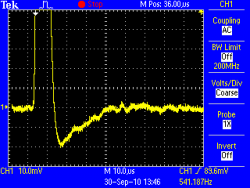 ADC (or A/D) means analog to digital converter. The ADC is a fundamental link between analog and digital electronics as it converts information in an analog signal to an equivalent digital form. This happens by the ADC accepting input pulses of 0-10V and converting these to digital numbers ranging from 0-8195. (The ranges here are from the device used in the experiment, the voltage- and digital number range may differ from model to model.) E.g for this device an input pulse of 2.0V would be converted to the digital number 1639.

MCA means multi-channel analyzer. Together with the ADC it forms a unit which sorts out and keeps count of the different pulses, and stores the count of each pulse in a multi-channel memory. The memory channel adress corresponds to the digitized value of the signal. In this way the pulses received from the detector system are sorted out and counted according to pulse height (voltage), which is proportional to the gamma energy. The total number of channels into which the voltage range is digitized is known as the conversion gain, and it determines the resolution of the MCA.
It can be connected to a computer, or another output device, in order to view the acquired spectre (Counts per channel).

Basic architecture of a MCA

The SA is connected to the ADC/MCA for conversion of the enhanced pulses. The next step is to adjust the gain, we want 0.5keV per channel. 137Cs has a gamma peak at 662keV, this energy then corresponds to channel number 1324. What voltage should the incoming pulses have? The answer is channel number divided by total channel number times the maximum voltage in the range of the ADC, here (1324/8195)*10V=1.62V.
With 137-Cs in front of the detector, we adjust the gain until we see pulses about 1.62V on the oscilloscope. The gain is then 10.348 and the MCA should now have a resolution of 0.5keV per channel.
Now the ADC/MCA unit is ready for connection to a computer to view the acquired spectre, and for further calibration.

Analog to digital conversion. The channel number given by the ADC is proportional to the amplitude of the incoming pulse.

(Written by: Therese and Inger Eli )

The electrical signal from the Ge-detector has now propagated through many components that has both shaped and enhanced the pulse. The energy of interest is of course that deposited by the gamma in the detector. The Gaussian-like pulse produced in the main amplifier will have an amplitude proportional to the gamma-energy. The signals from the main amplifier are analysed by the ADC/MCA unit. Information from the MCA is received by the lab-computer in the form of a histogram; number of counts pr energy bin. We use the spectrum analysis program MAESTRO to look at the resulting spectra. Since the detector has an approximately linear response, we have that:

E_gamma = a * channel nr + b, where we ignore higher order terms.

To determine the two unknowns, a and b, we need two equations. We need two known gamma energies and their corresponding channel number. Co-60 has two prominent peaks, one at 1173 keV and one at 1332 keV. Using the peak-finding function in MAESTRO, we find the channel number of the two peaks. The radioactive isotope Co-60 provides excellent calibration for energies in the region between 1-1.5 MeV. We recognize that the energy separation between the two peaks; delta_E = (1332 - 1173) keV = 159 keV, is small compared to the uncertainties connected to determination of peaks and detector resolution. A small error in the determination of a and b will give a large mistake for energies far from the calibration region (1173 - 1332 keV).

In the spectrum of Co-60 we observed three strong peaks in the interval between 1 and 1.5 MeV, but we expected only two . The unknown peak appeared to come from the considerable concentration of K-40 in the concrete walls of the lab. Table of Isotopes gives one gamma energy for K-40, E_gamma = 1460 keV. This peak would correspond to the highest of the three detected peaks. We also tested this theory by removing the Co-60 source from in front of the Ge-detector. The two peaks with the lower energy disappeared as expected. The reason why the background line was so strong, was that we did not shield the source with lead blocks. A rough calibration was performed with Co-60 giving poor results for low energy gammas.

We need an additional calibration-point at lower energy to get a more accurate calibration for low gamma energies. Co-57 has clear, separable peak at E_gamma = 122 keV. We finally decided to use the 122 keV peak from Co-57 and the 1332 keV peak from Co-60 as calibration points. The energy-separation between these peaks are: delta_E = (1332-122)keV = 1210 keV. These points certainly gave a  better calibration for lower energy gammas and still good results for higher energies.

Still the spectrum showing in MAESTRO needed improvements. E_gamma = 0 keV should correspond to channel nr 0. But in our case we had a negative energy in channel 0. We tuned the ADC until we got it right. New calibration was performed whenever we changed voltage. We also noticed that the energy pr bin was a bit over the pre set width of 0.5 keV. Increasing the amplification decreased the width of the bins to ca 0.5 keV. 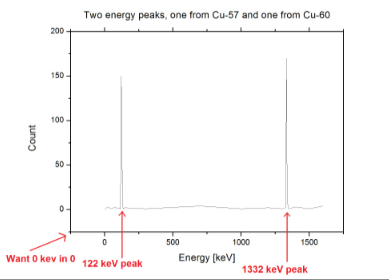 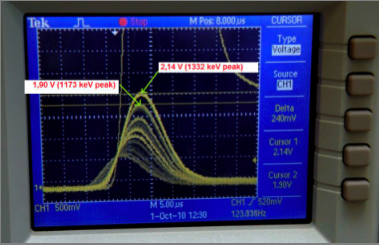 At this point in the experiment we were ready to look at spectra in MAESTRO and seeing correct energies of the peaks.

(Written by: Alexander and Sindre)

An important factor for detectors which are designed to measure energy spectra of gamma radiation is the energy resolution, R, given as ΔE/E. Energy resolution describes to which extent the detector can distinguish between two close lying energy peaks. It is usually given in terms of the full with at half maximum (FWHM) of the peak rather than in terms of standard deviation. Assuming Gaussian shaped peaks, the general relation between standard deviation σ and FWHM is given by

ΔE = FWHM = 2.35σ. This relationship is shown schematically in the figure below. 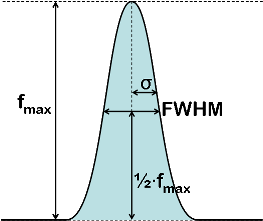 Peaks which are closer in energy than one FWHM interval are usually considered un-resolvable. The two dominant contributions to the resolution are from the detector itself and from the electronics, so the total peak resolution can be expressed as

For semiconductor detectors, the standard deviation due to counting statistics related to the charge production in the detector following the absorption of a gamma photon is given by

Where J is the mean number of electron-hole pairs created for a specific energy, and F is the Fano factor which will be described in detail later. The relative detector resolution can then be expressed as

In the last expression, w is the mean energy required to create an electron-hole pair (2.96 eV for Germanium), and E is the energy deposited in the Ge crystal. 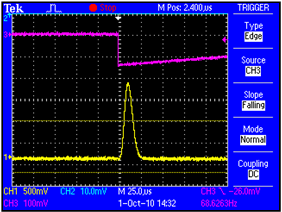 The above figure shows the experimental setup used for this part of the exercise. The 662 keV line from a radioactive Cs-137 source was used to measure the total FWHM. The result was FWHM = ΔE = 2.22 keV. In order to measure the contribution to the FWHM from the associated electronics the radioactive source was replaced by a produced signal from a pulse generator at 673 keV. The resulting FWHM was ΔEelec = 1.83 keV. The contribution from the detector is then

Solving this equation for F yields

The nominal value of F is 0.13 which means the experiment gave us a decent estimate of the Fano factor for Germanium. It is clear that a pulse generator is an excellent tool for determining the performance of the detector and the electronics, making it useful in troubleshooting a detector system.