From mn.fysikk.laglivlab
Jump to: navigation, search 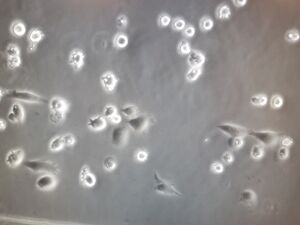 We started by assembling the microfluidic chip. PDMS had been prepared in advance. We plasma treated the PDMS and one normal, untreated glass slide in the plasma cleaner. We did not place a drop of water onto one of the inlets immediately after plasma treatment as we usually do, as we agreed to do this with the fibronectin later, in order to coat the chip.

After having assembled the microfluidic chip, we prepared the fibronectin as instructed in the protocol accompanying the product. We then placed a drop of prepared fibronectin onto one of the inlets of the microfluidic chip so that the channel was coated. Due to the plasma treatment being uneven, we experienced some spots without fibronectin. Next we incubated the coated chip at 37 degrees Celsius for about half an hour. In the meantime, we divided the prepared fibronectin between 40 eppendorf tubes which we then froze for later use.

Then we passaged our cells and removed some of them in order to inject cells into the coated chip. After injecting the cells by using a syringe and a syringe driver, we left them for about an hour at 37 degrees Celsius. When we came back, some of them had attached and adhered to the fibronectin-covered surface of the chip.